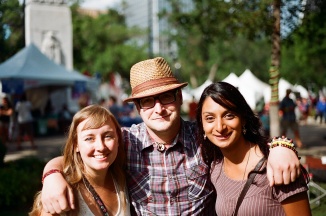 Back by incredibly popular demand: the one-stop guide for everything you need to know about going to Regina’s best music festival!

I love the Folk Fest. Really. I’ve been to plenty of festivals across Canada, and there are some really great ones out there, but they all make me think about how much I prefer Regina Folk Fest. There are a number of reasons for this, including, but hardly limited to:

Good memories – Even if a single RFF year isn’t as good as some in the past for me, on it’s own, I’m not just there for the weekend, I’m reliving all of my previous RFF times! And really, a “bad” year at RFF is better than a good year at some other festivals.
Happy people – I’m sure not every second of RFF is sunshine and lollipops for every single person, but the general mood of people is great. There is a distinct lack of shitty festival attitude (me-first types, poser-types, macho-types, etc.) that you get at some of the larger festivals, or in virtually every other gathering of human beings.
Bumping into people I know and actually want to talk to – We’re all guilty of not staying in touch with former besties. Part of the benefit of a major artsy event in a small city is that it brings out all of those artsy people you haven’t seen in a while. Even if you only see these people at Folk Fest, this is by far better than an annual virtual shout to them on their facebook page, for their birthday.
Beautiful freaks – I mean this term in the best way possible. I’m talking about the Neil McDonalds of folk fest, donning his straw cowboy hat, and twirling his hula hoops with the best of them. Or that older Asian fellow who does that hand/arm dance thing he does. What the hell is that? I love it! I love seeing people’s reactions to it! I love that he does it whether he’s being watched or not!
etc.

All that lovey-dovey hippy stuff aside, let’s get down to business. Contained within this document are secret keys to life that you will either need or at least wish you had, at some point, during the weekend.

something to sit on

Camera: Essential. Never leave home without it. Especially important for Folk Fest. I realize everyone has a tiny digital camera in their pockets, these days, and that’s perfect for snapshots, selfies, etc. But if you want to take good day/night photographs of a music festival with cool lights and lots of people, bring a real camera. It’s worth the investment. Personally, I use a run-of-the-mill SLR 35mm film camera that I bought years ago for $20. The cool 1930s TLR pictured above is functional, but just for show on this blog post. RFF may be mellow, but it’s still too rowdy for an old-timer like that.

Bike: I’ve gone with, and without. Totally worth going with it, if you have one. In years past, I was lucky enough to live within walking distance. If I’d owned a bike then, I still would have biked. There is tons of downtown bike parking, and RFF has a special bike valet for the weekend. They actually valet your bike! That alone is worth the ride. And let’s face it, Regina is not that big, and bike season is short. Make use of it!

Water Bottle: Regina Folk Fest offers non-stop, free water bottle refills. This is one of the best things about this festival! Bring a reusable water bottle, and, as always, never buy bottled water!

Something To Sit On: The beautiful grass and ground beneath the festival is actually plants in soil that have soaked up water. It has recently rained. I actually come packed with two large garbage bags, and a cool-looking textile thing to cover it up and look a little prettier. Trust me, you want a layer of something waterproof between you and the ground, if you are sitting on it.

Backpack/Hippy Bag: Despite this somewhat daunting list of carry-ons, I try to pack as light as possible, fitting it all into a maximum of two relatively small canvas bags – one backpack, and one shoulder. Worried about leaving your stuff at your spot? Make friends with those around you. If you have to leave for a short time, they will gladly watch over it. Regina Folkies are great like that. Just don’t abandon it for hours, and be prepared to return the favour.

Rain Gear: I’ve gone as far as huddling myself and two others under a large umbrella on the ground (not highly recommended) to just a simple rain jacket – the type that packs up into a teeny bag. Super handy, and a this point, I’m just going to call it essential!

Food: Festival food quality gets better every year (and I hear Caliber Coffee is going to be back, keeping my lifeblood on tap). It’s not cheap, though. If you’re a weekend-long fest-goer, relying entirely on food trucks/tents, you will be a poor after-weekend fest-goer. Bring a sandwich or pack some veggies. Something to snack on. Save that money of sweet, sweet merch! Speaking of which…

Money: I’ve said it before, and it holds true: I’ve gone to this festival with not one thin dime in my pocket, only hitting the freebie daytime stuff on Saturday and Sunday, dancing my feet into the mud, singing ’til my throat is sore, and having so much fun, I lose concept of time and space. And don’t think I’m above sitting outside the festival gates, listening to my favourite artists, when i couldn’t afford to hit the nighttime shows. I did it all with pride, and on a shoestring budget. You don’t need money to have a good time, with so many free performances during the day! That said, now that I’m a little older, and a little less of a university student, living on instant ramen, I take advantage of all the new music I can afford! And to be perfectly honest, I still eat plenty of RFF vendor food, despite my advice to bring snacks from home. It adds up fast!

Program: Hopefully, you picked up your advance copy in the last Prairie Dog. If not, there will be plenty at the festival. Get one, and hang on to it! I’ve even made notes in them, to look up artists later.

There are a handful of other things that have come up or been on my wishlist in past years, but this tends to cover the bases for me. I hope this helps either a little bit or a lot. By the way, that’s me, in the middle of the photo up there^. I’m usually with one or both of the ladies in the photo, at Folk Fest. If you see any or all of us, please come say “Hi”, and let me know about any other essentials that might have gotten missed here.